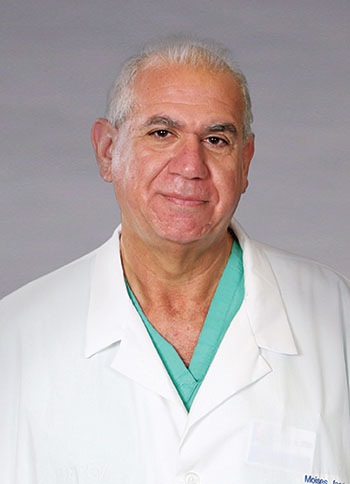 Moises Jacobs, M.D., F.A.C.S. is the Medical Director of the Gastric Sleeve Center at Jackson South Hospital.  He graduated from the University of Miami Medical School in 1979 and finished his general surgery residency at University of Miami/Jackson Memorial Hospital in 1984.

Dr Jacobs is world renowned as a pioneer in laparoscopy and has taught and mentored hundreds of surgeons throughout the world.

​Dr. Jacobs has been named honorary member of many surgical societies throughout the world, and has received several awards for his distinguished and pioneering role in laparoscopic surgery.  He has been performing advanced laparoscopic procedures since 1990 and is credited with accomplishing the first laparoscopic colectomy in 1990.

Since 2005, Dr. Jacobs has published articles and chapters on gastric sleeves and has participated in several International Sleeve Consensus conferences, whose purpose was to offer recommendations to increase the effectiveness and decrease the morbidity of this popular bariatric procedure.  In addition, he has published two textbooks and has been awarded several Unites States patents for his innovative surgical instruments.

​​Most recently, Dr. Jacobs has patented and published a new reversible bariatric clip which mimics the gastric sleeve, but requires no stapling or removal of the stomach.  Currently, it is approved in Europe and various other countries throughout the world.