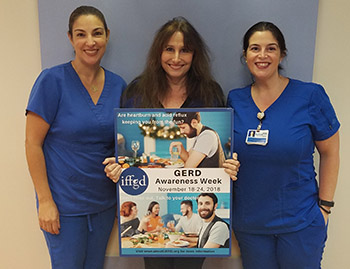 Chronic acid reflux or gastroesophageal reflux disease (GERD) is a condition that affects millions of Americans – up to 20% of the population – with sometimes debilitating effects. GERD is broadly defined as having three or more days of persistent acid reflux twice per week for a few weeks or more. This is, of course, distinct from typical heartburn which happens to all of us, on occasion.

Another common cause of gastroesophageal reflux is a hiatal hernia.  A Hiatal Hernia occurs when part of the stomach pushes into the chest through the esophageal opening in the diaphragm when that opening becomes enlarged.  It is estimated that 90% of obese patients also have a hiatal hernia.  To reduce postoperative reflux in our gastric sleeve patients, we routinely close the hiatal hernias at the same time as performing the sleeve.

The symptoms of GERD may vary depending on the patient as well as the severity and frequency of the reflux. Most patients will experience a burning and painful sensation in the chest, or upper abdomen – hence the name heartburn. These symptoms mimic those of a heart attack and may require immediate consultation with a physician. While most cases are, in fact, GERD, it is important to get emergency medical care if you believe you’re having a heart attack.  Other common symptoms include chronic cough especially when lying flat, asthma, hoarseness, difficulty swallowing due to inflammation of the esophagus, and regurgitation of gastric contents.

Some patients will not experience any outward symptoms of reflux – this is known as silent reflux and may go undiagnosedfor years, and only be identified when an endoscopy is done for unrelated reasons.

Although “heartburn”may not seem like a pressing medical issue, the long-term effects of refluxcan lead to poor quality of life and severe medical problems.  In addition, untreated reflux, may lead to precancerous changes of the lining of the esophagus.This condition, known as Barrett’s Esophagus, may be a potential precursor to esophageal cancer in 10 % of cases.

Anti-Reflux surgery is typically performed when lifestyle or medical therapies have not improved the patient’s chronic reflux condition,or when the reflux has caused serious medical problems such as strictures (narrowing of esophagus), bleeding, asthma, or Barrett’s esophagus.

Another indications is when patients don’t wish to be on lifelong therapy, which usually requires Proton Pump Inhibitors (PPI).  Recently it has come to light that chronic long term PPI treatment may be associated with multiple medical complications.

For the past 60-70 years, the surgicaltreatment for uncontrolled Gastroesophageal Reflux Disease had been a fundoplication accompanied by a Hiatal Hernia repair. During the fundoplication, the upper part of the stomach is wrapped or plicated around the lower part of the esophagus to reinforce the Lower Esophageal Sphincter (LES) which has weakened and is allowing acid or bile to push back into the esophagus. This surgery requires significant amount of dissection, and has risks of injury to the stomach, bleeding, and risks of the fundoplication slipping (moving out of place).

An exciting and relatively recent development in the treatment and management of Gastroesophageal Reflux Disease is a medical device known as LINX. The device is a small “bracelet” made of titanium beads that is inserted into the abdomen and wrapped around the lower portion of the esophagus at the Lower Esophageal Sphincter (LES). The ends of the bracelet are secured to each other with a magnetic clasp. Learn More about LINX for GERD.